O.M.G.!  Your Irascible Correspondent did not believe it was possible to be any more outraged at the betrayal of the United States of America, but I was wrong.   Douglas Gabriel and Michael McKibben of American Intelligence Media have been digging around for quite some time and unearthed devastating web of information regarding the 2020 rigged election.  I confess that I had never heard of these guys before (h/t Jeffrey Prather), but they demonstrate their acumen by the documentary evidence they present in support of their claims.  Claims which mesh with what we already know or strongly suspect.  There is a screen shot of their video, but the video itself I have not found, though there is a link to the audio recording below the screen shot on the page.

I am going to summarize their main points but I am not going to link to every thing that we already know, or ought to know as these things have been discussed elsewhere.

Since last November we have discovered that the CIA working with the DOD has developed and deployed software and systems to manipulate elections throughout the world for many years.  These systems have been applied to elections in the United States.  The various voting machine brands (Dominion, Smartmatic, etc.) though separate companies are all owed and operated by a single parent company, Scytl, SA, a Spanish company owned by the Paragon Group Limited, a UK company.  All these companies along with the Associated Press and US agencies the DOD, CIA, CISA are in bed with Amazon, Mircosoft.  Is it any surprise, then, why the CEO of Smartmatic, after lying about the security of his voting machines resigned and was made head of George Soros’ Open Society Foundations?

Obama turned control of all US elections over to Scytl, a foreign owned company, ALL US ELECTIONS ARE RUN AND CONTROLLED BY PRIVATE COMPANY, A FOREIGN COMPANY AT THAT.  This why the Maricopa County Board of Supervisors can believably claim that they don’t have the Administrator password to their voting machines, and therefore control of their own election, because the whole thing was controlled from someplace else.  This is why the Deep State is intent on stopping or wrecking the Maricopa County election audit.

But that dam is already cracking.  In New Hampshire the city of Windham voted to hold an election audit, and now the fight is on as to who the auditors will be.  Antrim County, Michigan, had a forensic audit of the voting machines and a hand recount of all the ballots, but because of the anomalies discovered a full audit is being called for.  There will be more. 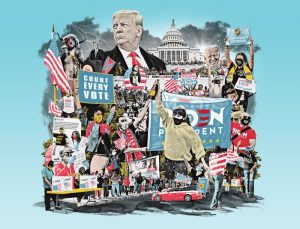 Until such time as the American electoral system can be restored the United States is not a democratic republic, we are subjects of an occupying power:

a well-funded cabal of powerful people, ranging across industries and ideologies, working together behind the scenes to influence perceptions, change rules and laws, steer media coverage and control the flow of information. They were rigging the election; they were fortifying it. And they believe the public needs to understand the system’s fragility in order to ensure that democracy in America endures.

I suspect that more and more Americans are realizing just how fragile the system is, how desperately it needs to overhauled and reformed, if America’s freedom is to mean anything at all.